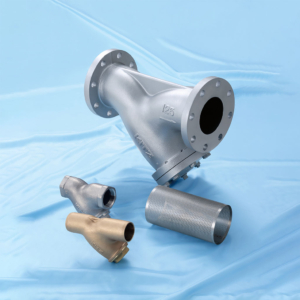 Various fluids such as water, oil, gas, air, and steam flowing through various piping lines contain foreign matter in the fluid, corrosion in the piping, gaskets, and other debris from separation. If the fluid is left as it is, the valve seats of various valves installed in the piping lines may be damaged, resulting in shortened service life, and the various devices may not be operated properly or the devices may be damaged. To prevent these problems, strainers that separate and remove foreign matter and dirt from fluids play an important role in the piping line. This strainer has a built-in screen that filters foreign matter and dust in the fluid, and has a structure that allows foreign matter and dust accumulated in the screen to be removed and cleaned while the strainer body remains connected to the piping.
Strainers are classified into Y-type strainers and U-type strainers according to their shapes. In KITZ, we manufacture Y-type strainers, which have relatively low fluidic drag and compact mounting spaces, and U-type strainers, which can be piped directly to equipment.

KITZ’s standard strainer screens are shown in the table below.

Screens are used in strainers to trap and remove debris and other foreign matter in flowing liquids or gases. There are three types of screens used in Y-type strainers: perforated screens, which are formed by punching a large number of holes in a flat sheet of stainless steel; mesh screens, which consist of fine stainless steel wires formed into a mesh arrangement in a plain woven pattern (Stainless Steel Woven Wire Mesh) or in Dutch weave (Dutch Weave Wire Mesh); and duplex screens, comprised of a mesh screen combined with a perforated sheet as a backup.
Select the type of screen that best suits your equipment, considering the type of fluid, pressure, flow rate requirements and other conditions. 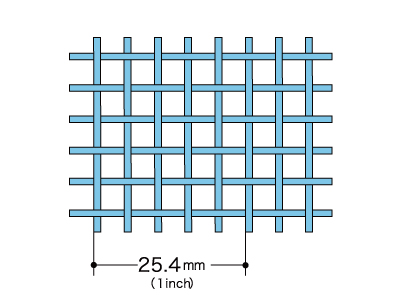 ♦Stainless Steel Woven Wire Mesh
Mesh screens are usually categorized in terms of mesh, which represents the number of openings per linear inch (or 25.4 mm) of the screen. The larger the number of meshes, the finer the screen. Note, however, that the area of the openings varies depending on the wire diameter even with the same number of meshes. Shown on the left is a typical example of a 5-mesh screen (5 openings per linear inch of screen).